The Regional Natural Park of Gola della Rossa and Frasassi is one of the green hearts of the Marche Region. Founded in September 1997, with its 10.026 ectares, is the largest protected environment of the region and includes the hypogeal complex Grotte di Frasassi. A tour in the park is a “tour in the heart of Marche", discovering its historical-artistic treasures, hidden in this charming and harmonious landscape, immersed in untouched, luxuriant nature. The Park is a natural oasis that gives us the chance to hike along its numerous paths, admiring the flora and fauna typical of the pre-Apennines environment. The area is also home to interesting natural events: karst topography and the presence of sulphurous springs. A great example of the karst phenomenon is the suggestive Gola di Frasassi, carved by the erosive water of Sentino River that has been shaping this places for thousands of years, forming crags and creating a unique, enchanting underground world: Frasassi Caves.

In addition to the marvels of the karst topography, this area is a treasure for its biodiversity, with its 105 species of nesting birds, 40 species of mammals, 29 among reptiles and amphibians and over 1250 species of plants. The fauna living in the Park of Gola della Rossa and Frasassi includes some species of great naturalistic value for the Marche Region. Some 105 out of 124 species present in the whole province of Ancona can be found here. The Golden Eagle is at the top of the food chain that includes mammals, birds, amphibians and crustaceans; in the Park, namely in the Frasassi gorge, makes its nest the only couple of eagles in the province of Ancona. It is also important the presence of other diurnal birds of prey, such as the Goshawk, the Short-toed Eagle, the Red Kite, the Lanner Falcon and the Peregrine Falcon. There are also nocturnal birds of prey, such as Owls, Barn Owls, Tawny Owls and Long-eared Owls; the presence of Eagle Owls in one area of the Park has been recently confirmed. Among the mammals, stands out the wolf, which has recolonized the Marche’s ridge in the last decade thanks to the legal protection of the species and the demographic increase of preys such as wild boar, deer and roe deer. The presence of wild cats and skunks has been confirmed, as well as the more common fox, weasel, marten and badger. Among the rodents, in addition to the most common squirrel and hedgehog, the park includes species such as the rare and elusive garden dormouse. Among insectivorous mammals are the hedgehog, animal symbol of the park, the blind mole and the shrew.

The many underground sites in this area are home to more than ten different species of bats. The Park’s colonies of bats are among the most important in Europe, with over 12.000 common bent-wing bats, present both in overwintering sites and in breeding nursery. Among the caves’ fauna, besides the newt it is remarkable the presence of the Niphargus, a rare and tiny crustacean that inhabit the ponds of the caves.

Regarding the flora, in the limestone areas of the hills hornbeam forests are common, while in marl-sandstone areas there are forests of downy oak and sometimes Turkey oak. In the mountain, beech tree forests grow. On warmer slopes of rocky gorges, the vegetation is typically Mediterranean holm oak, wild madder, oak, mock privet, strawberry tree, asparagus and rough bindweed. Vast areas of the Apennines ridge have been undergoing reforestation measures since the end of last century. The implants were performed mostly with resinous plants including: the black pine of Austria, the umbrella pine (P. pinea), maritime pine, the Aleppo pine, silver fir, Greek fir, cedars and cypresses. In the Park, there are extensive grassland formations, especially at the very top of the reliefs. In the park grow many rare plant species, among which we note the Moehringia papulosa that in the world is found only in the Gorges of Frasassi, la Rossa and Furlo, the Potentilla caulescens, the Rhamnus saxatilis, the Saxifraga australis and Ephedra major , remain of the Tertiary Era. From an historical-artistic point of view, the territory of the park it is full of a dense network of castles and monasteries of which there are many vestiges. Among the most important are: the large historical centres of Arcevia and Serra San Quirico, the Frasassi Sanctuary, the abbeys of Sant’Elena, San Vittore delle Chiuse and Valdicastro, the castles of Genga, Pierosara, Avacelli and Castelletta. (From http://www.parcogolarossa.it)

Discover the activities on our calendar of events. 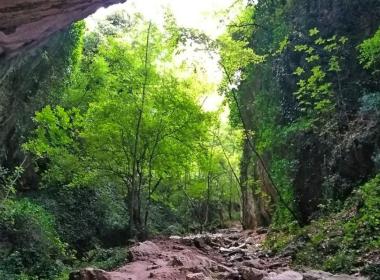 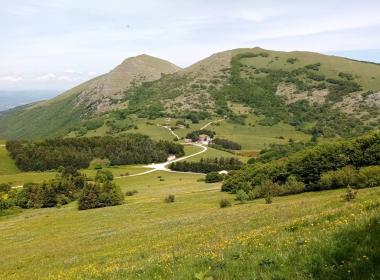 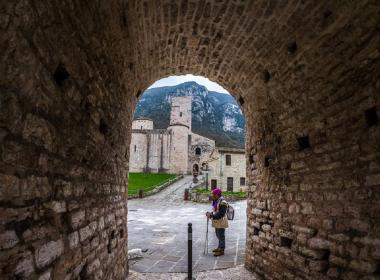