Monte San Vicino (from Latin vicilinus, vigilant) is a mountain of Marche’s Apennine located between the provinces of Ancona and Macerata. It is part of the outer ridge of Marche’s Apennine, it is the highest peak of the area and is visible from almost anywhere in the surrounding territory. This fact makes it a very recognizable element and, because of this, it has always been the main landmark for the whole area, in the past as well as in the present. Historical, architectural, cultural and religious evidence are actual proofs of this fact.  We must also point out that the area of San Vicino has had the privilege to host San Romualdo, Benedictine monk founder of Camaldolese order. There is where the Saint passed away (1027). He was buried in Val di Castro monastery, which immediately became a pilgrimage destination because the saint was worshipped as a “new” San Benedetto. For many centuries his remains were buried in Valdicastro abbey, at the foot of San Vicino (now they are kept in the Fabriano cathedral).

The whole area of Monte San Vicino (now Nature Reserve) was the setting for important battles during the Liberation war, in this area operated various partisan groups that took part in the memorable battaglia Roti-Valdiola-Chigiano of 25 March 1944, where partisans faced the Nazi-fascists. Every year many excursions are organised to commemorate those events and those who died in the forests and along the paths.

The landscape diversity concentrated in a not so large area make Monte San Vicino an ideal location to practice different outdoor activities. From the wonderful paths leading to Canfaito beech tree forest to the mysterious remains of Rocca degli Ottoni, from the gorges of Jana to Elcito, every hiker or cyclotourist can find something to enjoy. The forests alternated to cultivated fields, grazing land and small villages make this a unique landscape.

What to do in the Natural Reserve Monte San Vicino
Risorse Active Tourism organises, throughout the year, active and sustainable tourism activities for every taste and need. We will take you in the Natural Reserve Monte San Vicino with hikes, trekking, birdwatching, snowshoeing, cyclotourism, holiday camps and more. Risorse Active Tourism also organises tailored activities for groups, schools and associations. Find out about our upcoming activities, check out our calendar. 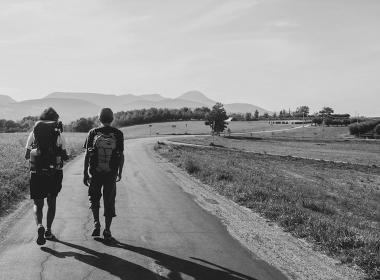